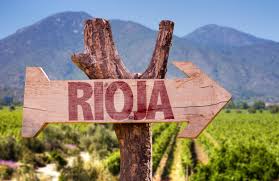 Rioja is a stylish but warming red, and it goes well with all kind of roasts, steaks and chops. There’s so much more to red Rioja than it seems at first glance. The fancy labels, the gold wire, the hessian wrap, the seals on the bottle, all give the impression that each bottle is as elaborately made as the next. This, of course, is far from being the case. Others may have minimalist packaging but conceal a truly great wine. Rioja is a large region with over 300 producers; most of the wine made here is sold very young, without any oak aging, and just becomes an anonymous supermarket brand or similar. Take a look at the label: if you see the words Sin Crianza, this wine has never seen the inside of an oak barrel and therefore will lack that lovely toasty vanilla aroma we all know and love. This flavour comes from the American oak preferred by top producers here. Rioja Gran Reserva spends two years in the barrel and three more in the bottle. These older wines are paler in colour, subtler in flavour than a typical red Rioja, but linger on the palate for a long time.

Bodegas Palacio is a centenary winery located in the heart of the Rioja Alavesa.  Since their foundation in 1894, they have made an important contribution to the revolution in winemaking that has taken place in La Rioja. Their founder, Don Cosme Palacio y Bermejillo, began producing his exceptional wines over 100 years ago, making the bodega one of a limited few to be selected as Bodegas Históricas de la D.O Ca Rioja.

Their wines are like a historical timeline of the region, starting with Glorioso which dates back to 1928; Glorioso Reserva and Glorioso Gran Reserva are both stunning examples of this style. Both of these wines are available at Number 21 Off-licence.