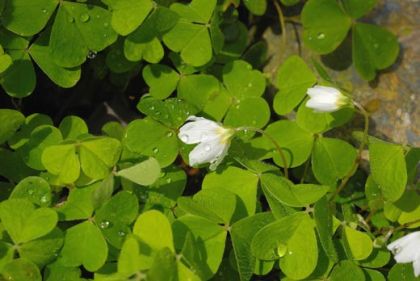 It’s deliciously sour, but in a pleasant, non-bitter way. It reminds me of lemons

As a seasoning, it provides a lemony/vinegary taste to whatever it’s added to

Once you’ve tasted a sorrel, you’ll never be able to forget the flavor and therefore will have a VERY VERY hard time misidentifying it in the future

Wood Sorrel only feels at home in moist, semi-shady areas

A walk in the woods, especially in spring in shady areas, can bring a welcome glimpse of vivid, fresh green – Wood Sorrel

Common sorrel has been cultivated for centuries. The leaves may be puréed In soup and sauces or added t0 salads; they have a flavour that is similar to kiwifruit or sour wild strawberries The plant’s sharp taste is due to oxidic acid, which is mildly toxic

Sorrel has been known as “cuckoo’s meate”, and it is thought that it got this name because people believed that the cuckoo used it to make its voice clear. It is also known as spinach dock. It grows wild as well as in gardens, and its leaves may turn to crimson, or the veins may become a purplish colour. It looks a lot like spinach and can be used in much the same way, although it complements eggs, chicken and other poultry as well as lamb, veal and goat’s cheese

Writing in 1720, John Evelyn says that sorrel “sharpens the appetite, assuages heat, cools the liver and strengthens the heart.”

If you visit Shiraz in Iran, sorrel soup, kardeh in Farsi, is sold by street vendors in winter, to ward off colds and flu. It is widely used in Russian cuisine and there it is believed that sorrel lowers blood pressure. In France it is also widely used in omelettes, soups and green sauce to accompany fish. The young leaves can be used in salads just as spinach and dandelion leaves can. These can be substituted for sorrel and vice versa. In Ireland they use sorrel in a dish that requires fish to be poached in milk